Adaptation to Aquatic Ecosystems from Headwaters to Ocean

The Texas blind salamander lives in underwater caves in the aquifer and springs that feed water to the headwaters and streams in the upper reaches of the Guadalupe River. Because it lives its life totally in the dark it has no eyes and has smooth unpigmented skin. It gets oxygen from small gills that look much like feathers attached along its side just behind its head. The salamanders are about 3 to 4 inches in length. Credit: The Meadows Center for Water and the Environment

Only about an inch and a half long, orangethroat darters live in headwaters and streams, remaining near the bottom or among rocks and other hiding places where they dart about in fast flowing water and in the small pools formed in streams. They are well-adapted to hugging the bottom when streams flood and flows increase because most darter species lack a swim bladder which is present in most freshwater fish. Credit: Thomas, Bonner and Whiteside, Freshwater Fishes of Texas, Texas A&M University Press

Guadalupe bass live in rivers and streams of the Brazos, Guadalupe, Colorado, Nueces, and San Antonio River basins in Texas. They are adapted to life in small streams and may grow to about a foot and a half long. They eat insects, crayfish, and small fish. The Guadalupe bass is the official Texas state freshwater fish and only lives in Texas. They are currently listed as a threatened species due to habitat degradation and interbreeding with stocked smallmouth bass. They are the focus of restoration efforts by the Texas Parks and Wildlife Department. Credit: Texas Parks and Wildlife Department 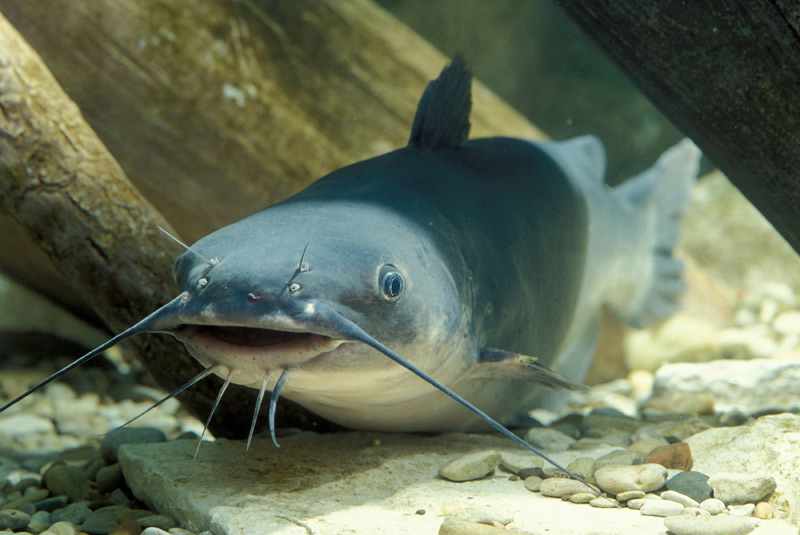 Blue catfish are opportunistic predators and scavengers along the bottom of reservoirs or large rivers feeding on fish, crustaceans, insects, and mollusks—dead or alive. They will even eat some plant matter, but as they grow they feed more and more on live fish. They depend on barbels or “whiskers” with many taste buds and a good sense of smell to guide them to food even in dark, muddy waters. In fact, catfish do not have scales but have chemoreceptors all over their skin, so they can taste food even before taking it into their mouths. Credit: Texas Parks and Wildlife Department 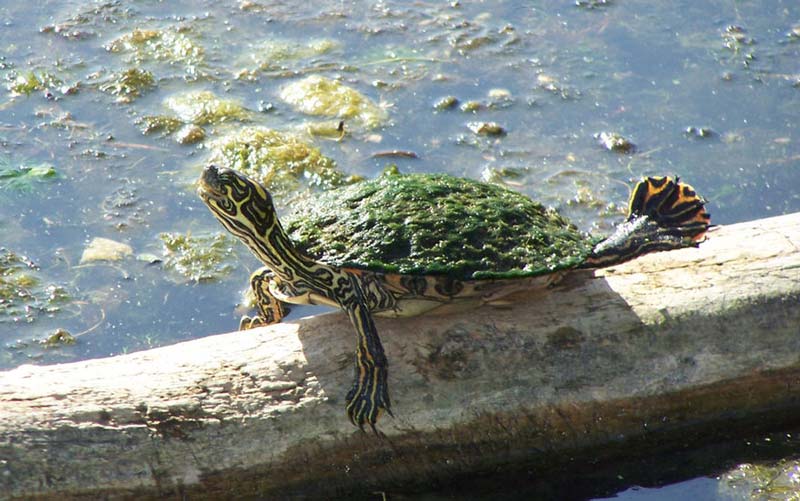 This turtle is often seen on river banks or logs basking in the sun. It can grow to a foot long and eats aquatic plants, grasses and algae. Large webbed feet make the river cooter an excellent swimmer, capable of negotiating moderately strong river currents. Credit: The Meadows Center for Water and the Environment 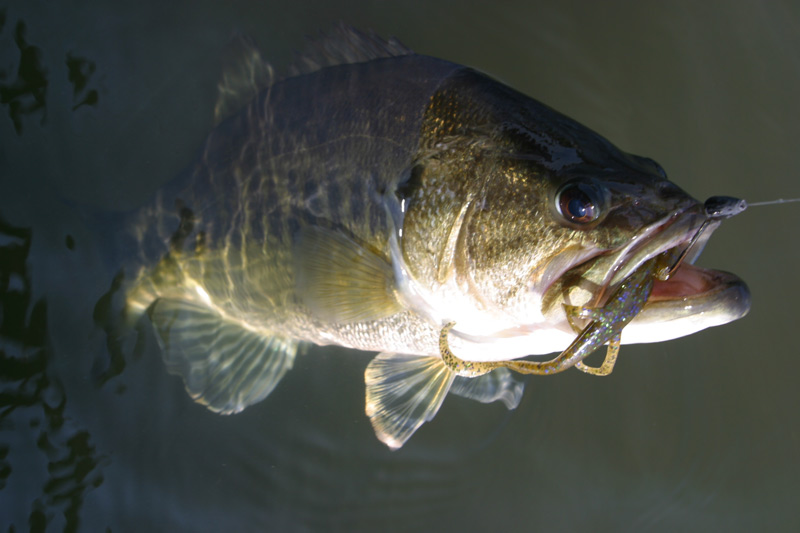 Largemouth bass live in reservoirs, wetlands, and large rivers where waters are slow moving. They are predators, meaning that they eat other animals, which are called prey. Their large mouths enable them to catch frogs, fish, crayfish, and other animals, including smaller largemouth bass. Their broad fins and strong, heavy bodies allow them to go in any direction (even backwards). They can move quickly for short distances to capture their food. Credit: Texas Parks and Wildlife Department 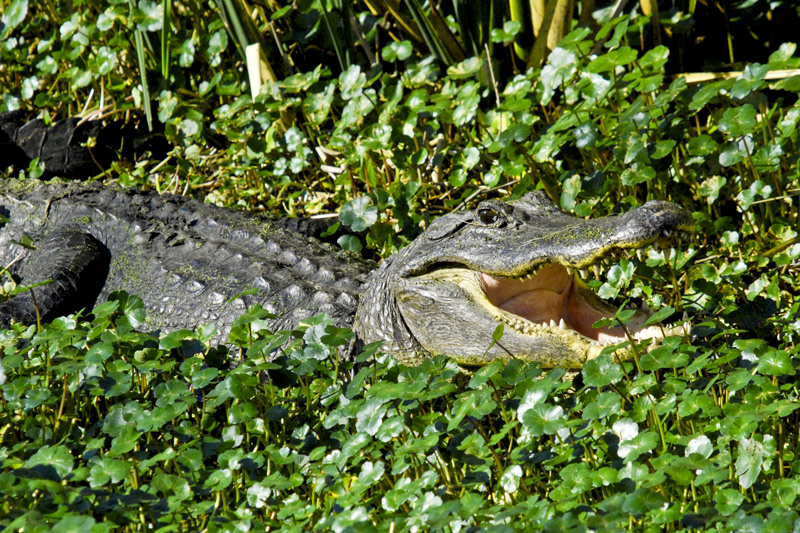 American alligators are reptiles that can be found in freshwater wetlands and brackish waters of Texas. They can grow to more than 12 feet long and have large powerful tails that allow them to move swiftly in the water to catch prey, such as fish, turtles, small mammals, birds, and even other alligators. They often can be seen floating just below the water’s surface with only their eyes and snout poking out from the water. Placement of their eyes and nostrils is an adaptation to life in water that allows them to breathe air and see around them while staying submerged and hidden. Credit: Texas Parks and Wildlife Department 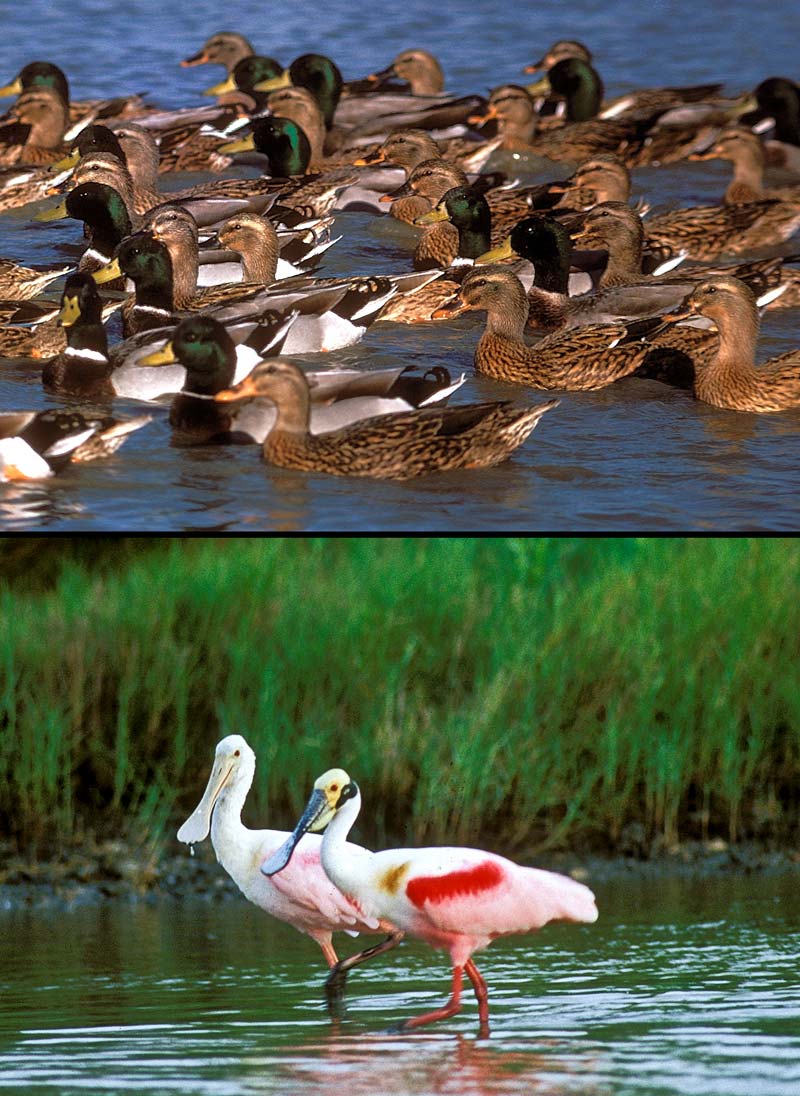 Mallards (above) and roseate spoonbills (below)

Waterfowl are ducks, geese, and swans. They are adapted for swimming with webbed feet and for floating on the water’s surface as well as diving for short distances underwater. Other water birds are adapted for wading in water with long thin legs. Many also have long beaks that they dip down into the water to pick food items off the bottom of shallow streams, ponds, and estuaries. Credits: Texas Parks and Wildlife Department 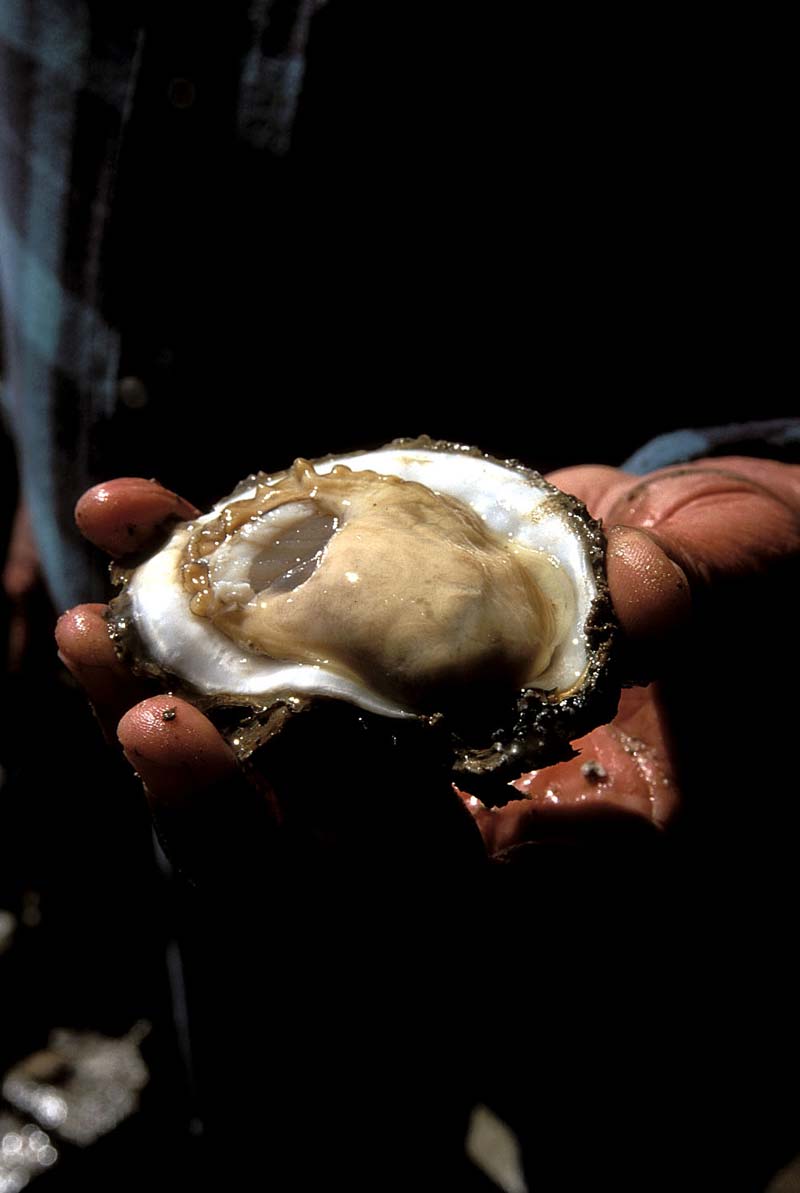 Oysters live in estuaries and bays, feeding on plankton by using their gills to filter tiny food particles out of the water. At two weeks of age, oyster larvae, each about the size of a grain of pepper, settle onto objects to which they attach with cement-like glue. At this stage, they are called spat. They begin a complete metamorphosis process to build their shell and spend the rest of their life in this one place. Oysters have been found attached to bricks, boats, cans, tires, bottles, crabs, and even turtles, but they usually attach to other oysters. When a large number of oysters join together, it’s called an “oyster reef”. Over 300 different marine aquatic species have been found to use oyster reefs for habitat, refuge, and food. Credit: Harte Research Institute for Gulf of Mexico Studies. 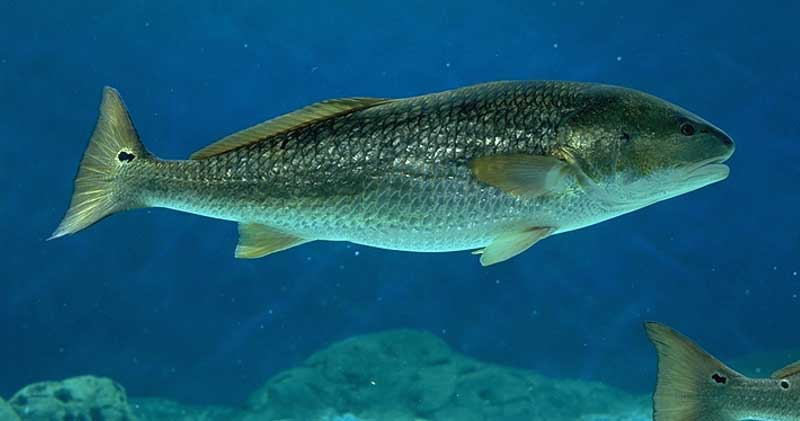 Red drum, also called redfish, live in shallow brackish waters about 1-4 feet deep along the edges of bays with submerged vegetation such as seagrass when they are young. They are also commonly found around oyster reefs and around soft mud along jetties and pier pilings. They sometimes are in water so shallow that their backs are exposed while swimming. They can live in freshwater, but when they are about three to six years old they move out into the deeper waters of the Gulf of Mexico where they can live entirely in saltwater. Credit: Texas Parks and Wildlife Department 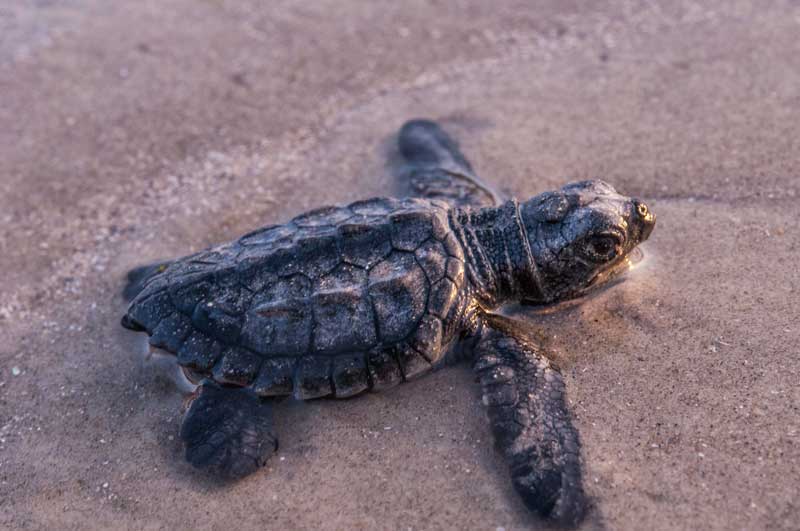 One of five sea turtle species found in the gulf waters of Texas, The Kemp’s Ridley sea turtle is an endangered species. They can grow to 32 inches long and weigh as much as 100 pounds. Sea turtles’ feet are formed as flippers allowing them to swim through the water. These turtles lay eggs along Texas’ beaches. Once hatched, the young turtles make their way across the beach and into the Gulf of Mexico where they spend their entire life. Although they live in the ocean, turtles do not have gills, so they must come to the surface to breathe. Credit: Jennifer Idol: The Underwater Designer 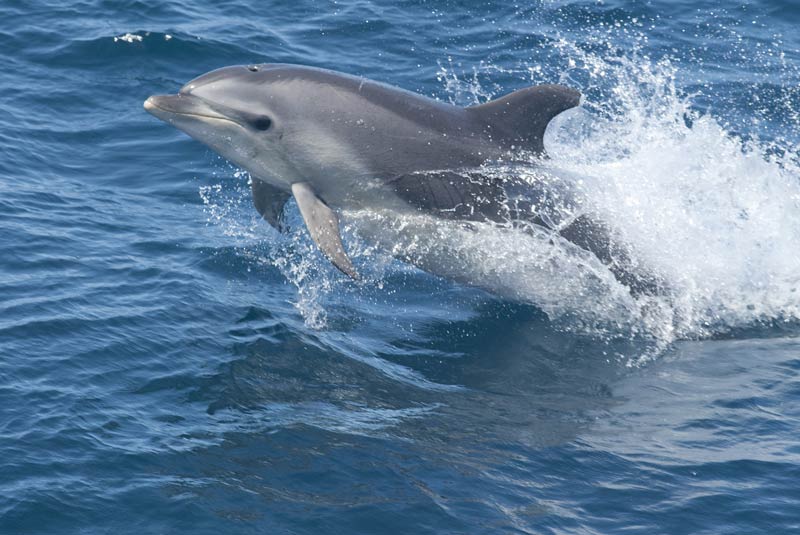 Bottlenose dolphins are mammals that breathe air and live their entire lives in water. They are often seen in Texas’ bays and passes to the Gulf of Mexico. They travel alone or in small groups called “pods.” They feed on fish and mollusks, with mullet their main food in Texas’ bays. They find food using sound waves in a process called echolocation. Credit: Allison Henry, National Oceanic and Atmospheric Administration-NEFSC/Department of Commerce